FC Buffalo is both humbled and thrilled to announce that our 10th season will feature the club’s first time leaving North America.

Many of our supporters will recall celebrating the 40th anniversary of the Sister City relationship between the City of Buffalo and the City of Dortmund with the Buffalo Dortmund Sister City Committee and the lord mayor of Dortmund’s delegation last Spring.

The gathering at Mes Que included a casual conversation with lord mayor Ullrich Sierau about FC Buffalo representing our city and country when a return visit was paid to Germany in May 2019 as a part of the Dortbunt Festival, and the lord mayor even took our scarf to Buffalo City Hall with the suggestion that it should say, “For our cities.”

That led to months of conversation and work to see if the undertaking was feasible, and our outreach both overseas and domestically found some partners who were very much in line with our club’s vision to represent an inclusive, people-first soccer community and world. We’d especially like to thank Erik Stover, Julian Neuburger at Match IQ, Greg Engle of Buffalo Dortmund, Shari, Mike, and Dwight from Rich Products, Adam, Stacy, and Ron from The Travel Team, and Chris Zitterbart and Dietmar Mertel for expertise and advice.

What the work has produced is a plan to spend a week of our preseason, May 5-12, in Germany, playing multiple friendlies, training, and experiencing the great nation as proud representatives of Buffalo, New York.

In addition to a match in Dortmund as part of the festival, FC Buffalo is honored to start our journey in Hamburg, Germany, where will we train at the grounds of inspiring 2.Bundesliga side FC St. Pauli, one of Germany’s most well-known clubs, popular for its progressive stance, raucous support and community-based identity, and a club which is well-supported in our city as well.

The club will also play a friendly against FC St. Pauli II, an incredible distinction as FCB becomes the first NPSL club to play matches in Europe. FC St. Pauli actively fights against racism, homophobia and discrimination. Further info will be coming from FCSP via their channels in the coming days.

Of course, we’d love to include you in our travels. Those interested should email nick@fcbuffalo.org.

FCB’s second opponent will be announced later this Fall, and the club is excited to announce a number of measures aimed at increasing our ability to put our best foot forward overseas and once we return home for the 2019 season.

The club is supplement the adventure with a multi-tiered fundraising campaign, and we think you’ll be very pleased with the offerings!

*All items include optional but regular email updates on the trip and season. 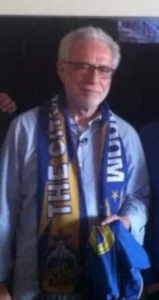 1) Early returns say the headline item is a bobblehead of CNN anchor and FCB namesake Wolf Blitzer, who has agreed to autograph a limited number of the collectibles. PURCHASE HERE

2) Fans can also get their name amongst others on a special jersey to commemorate our 10th season. Season ticket holders are automatically eligible for the honor, and those who’d like to join the shirt but are unable to commit can pay the same price and donate their season ticket to Journey’s End Refugee Services, West Side International Soccer, Algonquin Sports For Kids, Jericho Road Community Health Center, or other fine organizations. For an additional fee, fans can get the jersey. PURCHASE HERE

3) The club has also issued a 10th anniversary scarf and shirt with the FCBuffa10 logo on one side and “For our cities” in German on the other in honor of Dortmund lord mayor Ullrich Sierau’s alteration on our longtime motto. PURCHASE SCARF | PURCHASE SHIRT

4) Want all four options? Yeah, of course! Save a bundle by bundling them together and help us on our way. PURCHASE HERE

MATCH IQ is a specialized sports marketing company with a wide range of partners, including football clubs, federations, right holders and TV channels. We advise our partners on a host of topics, including the planning and implementation of major events, activation of sponsorships as well as the internationalisation process. Over the years, Match IQ has gained a reputation for delivering complex projects all over the world – working hand in hand with its partners, Match IQ creates a clear strategy and executes it to the highest standards.