FC Buffalo concludes its regular season with road matches at Reading and Erie this weekend before back-to-back home matches on July 16 & 17. Admission is only $5. Come out!

It was contentious, it was fast-paced and it was loud.

Once the game began, it was all business from two sides that clearly wanted to lift the Cup. FC Buffalo’s Mike Reidy opened the scoring after a long throw from defender Jake Rinow led to a BTFC mishap in the box. It was 1-0 in the 14th minute, one of many goals on the night.

Nearing halftime the preseasoning Terriers seemed to be finding their stride despite a short bench, cross-Atlantic travel and matches on consecutive nights, but FCB defender Corey Phillips latched onto an Andy Tiedt feed and slotted home right before the break to make it 2-0, Blitzers.

As the second half began, Mike Unwin continued his impressive move from forward to right midfielder with a beautiful through ball for Cory Cwiklinski. The Medaille man made a deft move on the keeper and finished to open up a 3-0 lead. 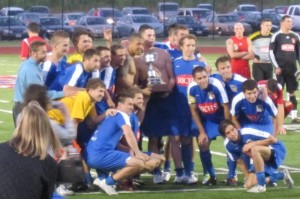 For more info on FC Buffalo matches or how to partner with the club, email nick@fcbuffalo.org or scott@fcbuffalo.org